Heading into the holiday season, telco providers are gearing up for a surge in sales. But could they be doing more to compete with others in this lucrative space?

Lightico’s new survey of 1,000 people (aged 18 to 65) found that consumers are looking for ease and convenience when shopping for technology — and the big players sometimes fall short.

That means there’s room for telcos to earn a bigger portion out of the holiday retail sales season. They simply have to streamline and digitize the buying process to increase sales of phones and those important add-ons.

The Holiday Season is Going to Be Huge for Telco Retailers

It’s no secret that the weeks leading up to Thanksgiving and Christmas are significant for online and brick-and-mortar retailers. Although sales of smartphones are quite steady year-round, there’s a noticeable spike during Q4.

According to Gartner, worldwide smartphone sales topped 1.5 billion in 2018, with 408 million units shipped in Q4 of that year. Indeed, the busy holiday season is a boon to retailers in the e-commerce and offline spaces.

In 2018, Amazon reported its best holiday season ever. In its press release, the company promised to bring consumers convenience, fast delivery, wide product selection and low cost. Those benefits align with what research shows drives many online shoppers: the ability to compare prices, find good deals, and shop 24/7.

But regardless of the appeal of e-commerce, some major brands are making the biggest impact offline. Apple uses its network of stores to make every new phone release an event. In September 2019, the launch of the iPhone 11 was met with lineups of eager consumers at the brand’s global flagship locations. There’s still tremendous benefit to the offline experience: in addition to creating buzz around new products, retailers can offer on-site upsells and knowledgeable service to customers.

But from the customer’s perspective, both of these options are less than ideal when it comes to buying a new phone. While customers want the newest phones — our survey found a large number of respondents plan to upgrade their phone soon — many consider the purchase process a burden.

New Phones Are on This Season’s Shopping Lists

Lightico’s survey found that across age demographics, almost half of respondents planned to buy a new phone this holiday season. An additional 18 percent were undecided. The brand most likely to benefit is Samsung, with more than 50 percent of consumers planning to buy a Samsung phone. That’s more than the iPhone or other brands. But these same individuals face frustration when purchasing phone technology. But Consumers Say It’s Hard to Buy a New Phone

Despite the demand, smartphone retailers apparently haven’t met the mark when it comes to the buying experience. Our survey found that upgrading is too difficult, with 40 percent ranking it a 7 or higher out of 10 as level of difficulty. Fifteen percent ranked it either a 9 or a 10.

What are some of the pain points of these consumers? As it turns out, many are forced to go in-store to buy, even when they don’t want to, this results in poor CX, NPS and CSAT.

Buyers Frustrated By the Need to Go In-Store

We may live in an online world, but consumers still visit a physical location to buy a phone. Of our survey respondents, 49 percent made their last phone purchase or upgrade in-store and 43 percent planned to take the same path the next time.

That’s because it’s currently the easiest route, according to 44 percent; 32 percent said the easiest was doing the purchase with a computer. In comparison, 46 percent said dealing with a phone agent is the hardest way, and 30 percent was by using a mobile device.

But just because going in-store is the easiest route doesn’t mean it’s ideal. In fact, 43 percent said seeing a phone in-person is the least important factor when purchasing or upgrading. That makes sense, considering the devices are so pervasive — it’s just as easy to look at online specs or try out a friend’s handset. Nonetheless, big smartphone brands — like iPhone — seem to push those in-store experiences on consumers. This provides a great opening for telco providers to sell directly to their subscribers.

Streamlining the Purchase Experience Is a Competitive Advantage

Telco companies have a huge opportunity by digitizing the telesales purchasing experience and reducing paperwork. The amount of paperwork, as well as printing and scanning forms, together represented the top frustrations of more than 25 percent of the survey group. There’s an upside to consumer frustration — it signals an opportunity for brands to win over some phone buyers — and to sell them more than just their new device. The potential may lie in the phone call. Survey results show that a phone call was preferred by 42 percent of respondents. With all the discussion around in-store or brick-and-mortar, a large segment of consumers just want to pick up the phone and talk with someone. Telcos increasingly want to enhance client packages with insurance and attractive financing plans. These are additional sources of revenue for companies, but during an online or in-person transaction, it’s easy for a busy consumer to just buy the phone and leave.

During a phone call with a live agent, it’s easier for brands to talk through the potential upsells, as well as describe the benefits of service plans and options for renewal.

This is a way to increase average revenue per user (ARPU), and our survey showed that companies so far are falling short. More than 58 percent in our survey had bought insurance, warranties, or had a financing plan on their phone. However, only 54 percent of those said it was easy to understand and buy.

So there’s clearly room for improvement — to make the initial upsell easy for the consumer, and to improve customer comprehension and satisfaction.

Millennials Are Ready to Buy

One particular target market ripe for the upsell — and improved convenience in buying a new phone — is millennials. Fifty-three percent plan to buy or upgrade this season, with 35 percent eyeing the Samsung Galaxy. They are also ready to depart their current plan, or that of their parents, in order to get an improved experience. More than half would switch in order to get a great mobile or online experience.

In-store is the easiest option, according to this key demographic. But buying over the phone is considered the most difficult for 45 percent. That’s because of the burden of paperwork. This paper burden is the top frustration of millennials who are planning to spend money on a new smartphone.

Lightico’s survey shows telcos can compete across channels. They can reduce customer frustration and increase satisfaction by simplifying and digitizing the process. At the same time, companies can upsell lucrative plans and accessories that lead to a greater average revenue per user. 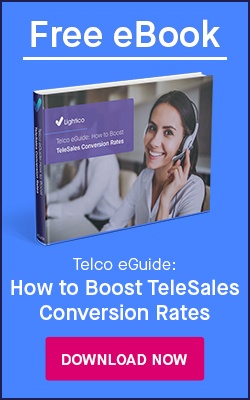