Last year, $7 billion was lost in the U.S. due to auto loan fraud — compared to a mere $2.5 billion a decade ago in 2010. The schemes are getting more sophisticated and therefore, more costly. From shell companies to nonexistent cars, here are the five most outrageous and financially damaging auto loan schemes of 2019 covered in auto finance news.

The scoop: Six co-conspirators played a role in a scam involving more than 80 fraudulently obtained car loans and $1.7 million in credit union and bank losses. The dealers began by establishing corporations such as “Premier Luxury Motors” and “5-Star Motorsports.” The catch was that these were shell corporations with no cars, licenses, or employees.

Once the companies were created, the fraudsters recruited people to apply for car loans, primarily with credit unions. The loan applicants would claim they were purchasing a vehicle from one of the fake dealerships, and even included falsified purchase orders. Any loan checks the applicants received would be deposited into the accounts of the shell companies. The conspirators would split the proceeds, and the lenders were left with nothing as there were no cars to repossess.

Amazingly, the scheme carried on for four years until it was busted.

Why it matters: There are plenty of scams out there, such as power booking and odometer rollbacks, designed to misrepresent the real worth of a car to get more out of a lender. Yet lenders should also be aware of the more extreme — yet real — possibility that nonexistent cars may be being sold to nonexistent customers.

When all you’re counting on is paperwork that can be easily forged, compliance is at risk. Without additional digital measures like photo-based verification, it’s surprisingly easy for fraudsters to pull off something like this.

The scoop: A former Porsche salesman in Pompano Beach, Florida rang up $3 million in sales from bogus sales. The fraudster, Shiraaz Sookralli, was in the business of selling rare yet-to-be-built Porsche models, and succeeding in making sales to 30 customers. Just one problem — the cars didn’t exist and never would.

These buyers parted ways with their hefty deposits through bank checks, wire transfers, and cash that Sookralli would deposit into his shell company’s bank account. The shell company was opened with a similar name as the legitimate Champion Porsche dealership he worked for, making it easier to dupe unsuspecting customers. Sookralli used “false and fraudulent purchase orders on official Champion Porsche forms, [and] sham vehicle build sheets” to seal the deals.

When the scheme unravelled, Champion Porsche filed a lawsuit, while the FBI filed a criminal complaint charging the salesman with wire fraud, mail fraud, and money laundering.

Why it matters: This is first and foremost a case of a rogue individual using a legitimate dealership as a cover for criminal activity. But it’s also clear that the real Champion Porsche didn’t heed the warning signs, which included him not reporting any sales for a period, yet leading a notoriously flashy lifestyle.

Remember that dealers’ first priority is to sell, not keep watch. Like it or not, as a lender, you can’t take it for granted that dealerships are paying attention to the issues that matter most to you, such as compliance.

The scoop: A jury charged three Kentucky residents with 10 counts of fraud and identity theft amounting to $4 million. The men, who worked at Big Blue Motor Sales, organized a scheme to misuse an undisclosed car company’s warranty extension program.

The fraudsters purchased the trucks at wholesale prices at auction through their dealership. They went on to obtain hundreds of state residents’ driver’s licenses, falsely titled the trucks in those residents’ names, and persuaded the car company to repurchase the trucks for 150% of their value (as long as they were owned by individuals, not a dealership). Between 2013 and 2015, 350 trucks were involved with the scheme.

Why it matters: This warranty fraud scheme is an example of classic identity theft. While 80% of auto loan fraud today involves synthetic identity theft, in which a totally new identity is created, classic identity theft exploits both the lender and innocent individuals. This repurchase scheme could have been busted from the outset had the car company required the “customers” to take a selfie with their drivers’ licenses to complete identity verification.

The scoop: A used-car dealer in Helena, Montana named Robert Allen Nissan defrauded its captive, Nissan Motor Acceptance Corporation (NMAC), on its floor plan loan by selling vehicles out of trust and keeping the proceeds for months. Under the required terms, Robert Allen Nissan had been expected to pay back the loan for each vehicle as soon as it was sold. According to findings from an audit, however, Robert Allen Nissan failed to repay loans worth nealy $800,000 for 25 vehicles.

As part of a court agreement, NMAC repossessed the vehicles and won $2.5 million, plus attorney fees incurred by NMAC.

Why it matters: Selling out of trust is far less common than it used to be, thanks to faster, Internet-driven communication between dealerships and lenders. Unfortunately, it still happens, as this recent story shows. When a dealer doesn’t repay the loan, you as the lender cannot seize the car — enabling schemes like this one to spiral out of control. That’s an advantage of lending directly to car buyers: if he or she fails to pay back the loan, you can repossess the car.

A digital loan system could have enabled the captive to catch the scheme early on by automatically surfacing the delinquent loans.

The scoop: Fraud analysts at a company called PointPredictive announced that their analysts have uncovered $5.5 million worth of synthetic identity fraud in December alone. The scheme began with applicants (or in 15% to 20% of the cases, car dealerships) taking valid Social Security Number prefixes and altering the last four digits to produce new synthetic identities.

With these new identities, car buyers receive loans they normally wouldn’t be qualified for due to credit score problems and the like. This new pattern of fraud affected multiple lenders, and is poised to keep growing.

Why it matters: Unlike a stolen Social Security Number, synthetic fraud is more systematic to perpetuate at scale. As it catches on, this type of fraud has the potential to wreak havoc. However, a tip-off that you’re looking at a synthetic SSN is that the last four digits are frequently chosen to match the birth year of the fraudster so they can easily keep track of the ID.

The solution: Digitally identify and verify your customers to mitigate fraud risk

There are dozens of different types of auto loan fraud, and unfortunately they are all alive and well. Many of the most financially costly types of auto finance fraud in 2019 involved complete fabrications — shell companies, nonexistent cars, and nonexistent customers — often perpetuated by sophisticated co-conspirators.

While these are the stories that make headlines and cost lenders fortunes, more banal types of fraud such as exaggerations of income and forged bank statements are widespread. Fraud is exploding, whether large or small-scale.

The good news is, there are easy-to-implement solutions that can significantly reduce your fraud exposure. Currently, lenders use a plethora of different channels to collect a hodge podge of stips, forms, proof of income, bank statements, esignatures, and more.

Such a paperwork-heavy environment is the perfect playground for crooks, who find it easier to distort the truth amidst the chaos. But auto lenders can easily mitigate the risk of fraud by processing loan applications through a single, streamlined digital channel.

Lightico allows lenders to collect all elements of a loan application through customers’ camera phones and with the click of a text message. Not only does this significantly speed up the time to funding, it also simplifies KYC and reduces the risk of fraud by instantly verifying customers through Knowledge Based Authentication (KBA), One-Time Passwords (OTP), or photo-based verification. Payment is also fully secure thanks to PCI-compliant mobile payments and ACH and direct debit forms. 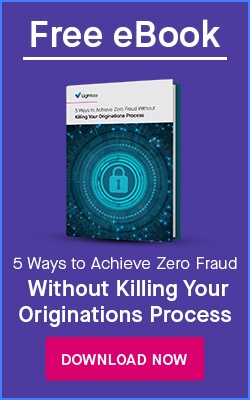